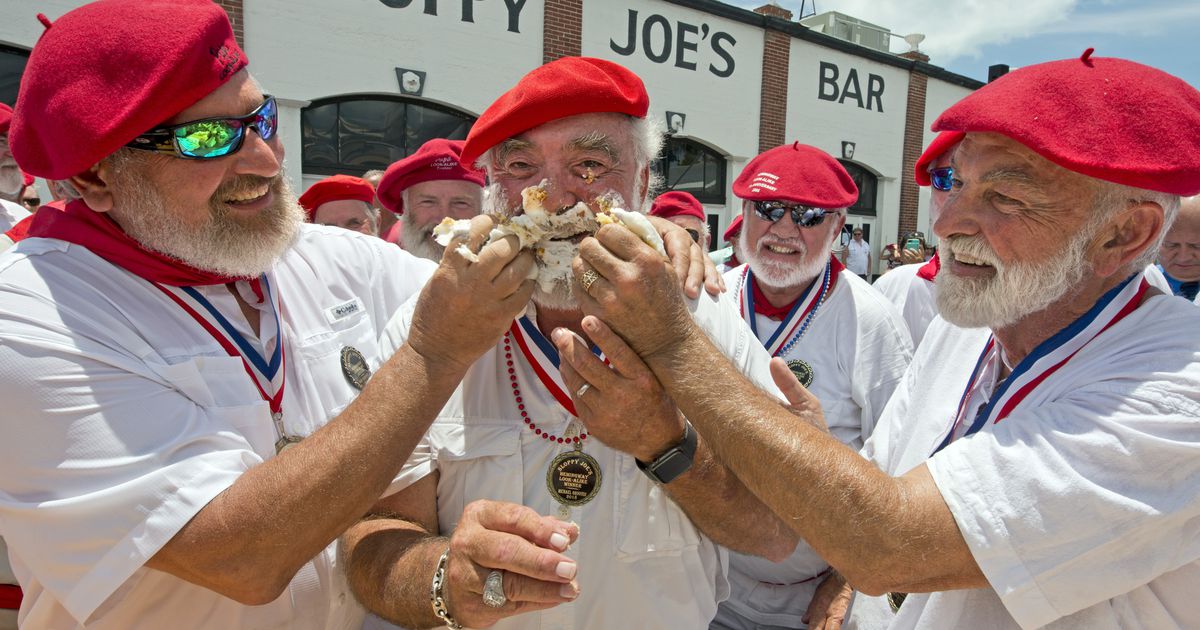 In this photo provided by the Florida Keys News Bureau, Dave Hemingway, left, and Richard Filip, right, smear Michael Groover’s birthday cake after they and other Ernest Hemingway lookalikes sang “Happy Birthday “to the famous American author Saturday, July January 20, 2019, in Key West, Florida. Dave Hemingway (not related to the author) won the Hemingway Look-Alike 2016 competition, Filip was victorious in 2017 and Groover, the husband of celebrity chef Paula Deen, won in 2018. July 21 marks the 120th birthday of Hemingway, who lived and wrote on the island in the 1930s. Fun was a facet of Key West’s annual Hemingway Days festival which ends Sunday, July 21. (Andy Newman / Florida Keys News Bureau via AP)

By Rich Finlinson | Special at The Tribune

The beard I grew during COVID isolation and recent Ken Burns and Lynn Novick documentary series on Ernest Hemingway leads to thinking about the similarities and differences, and how some things trump others.

We all started our professional journeys as myopic journalists writing for our high school newspapers and graduating on the daily schedule.

At 18, he left the Kansas City Star for Europe, where he drove ambulances for the Red Cross in Italy. When I was 19, my first stories were sent to NPR, which was then a new network.

I worked briefly for the Associated Press in Washington, DC. He has written extensively for the North American Newspaper Alliance.

He quickly adopted writing short stories, novels and non-fiction as an eyewitness to war, romance and bullfighting. I slowly moved from broadcast news to marketing technology and public relations.

He wrote bestsellers which turned into movies. I wrote grants that funded social media interviews.

Rich Finlinson and the bicycle he won in a coloring contest in 1962.

He won the Nobel and Pulitzer Prizes. I won a bicycle in a coloring contest and a few journalism scholarships.

He shot big game in Africa. I shot a video on my smartphone.

We faced the dual demons of anxiety and depression and faced various fluids. He drank and ordered his 38 foot fishing boat. I found heartwarming swim lengths in a 50-meter pool and excessive content on LCD screens. In short, we both enjoyed water polo.

He suffered multiple head injuries as a war correspondent, an outdoorsman and a world traveler. I suffered several minor injuries as a mountain biker and novice triathlete in northern Utah.

He had access to many prescription and borrowed pharmaceuticals. He underwent several cycles of electroconvulsive therapy at the Mayo Clinic. I have followed decades of advice and have access to pharmaceutical and geriatric expertise unknown during his lifetime.

He died of suicide at the age of 61. I lived to write these words on my 67th birthday at the end of May, which coincidentally is Mental Health Awareness Month.

He is a legend. I’m wearing a mainstream hoodie that says, “Grandpa: the man, the myth, the legend.”

I am not Hemingway. It’s not Finlinson. Still, if we meet at a waterhole below, I think our similarities and differences would lead to a nice conversation.

He may not agree.

Rich finlinson, Salt Lake City, is the author of “How to Capture Ideas and Create Compelling Content”. He is associate director of the Utah Education and Telehealth Network and a communications volunteer at SC21: The International Conference for High Performance Computing, Networking, Storage and Analysis.